Noises in Air Source Swimming Pool Heat Pumps are measured in a dBA @ 1m which is the level of noises in free air at a 1metre distance from the pool heat pump.  With every one-meter extension, the dB level falls by almost 6 decibels. As such, if your air source pool heat pump is 8 meters from your standing point, the noise at 75dBA will reduce by 57dB.

While an air source pool heat pump can be fairly quiet or too noisy, it will depend on the size of the machine itself, along with the compressors and fans it uses. For instance, a heat pump using a Sanyo compressor is quieter than the ones running on Copeland. Further, centrifugal fans guarantee less noise when compared to prop models.

On the other hand, a small Air Source Swimming Pool Heat Pump dB rating will fall between 60 -70, while a larger one will have a dBA of 70. In practicality, a standard refrigerator hums with 45 dBA while an air conditioner gives around 60 dBA.

The noise only becomes destructive when it’s running at 70 DB. Considering that Air Source Swimming Pool Heat Pumps run at about 40-65 decibels @ 1m, they should be fairly noisy. However, if it’s too cold, it will go up to 80deceble. Variations of noise will also depend on the manufacturer. For instance, an air Source Swimming Pool Heat Pump with large fans will be extra noisy. Also, expect a noisy environment during start-up, and it will also depend on sound barriers. Let’s see. 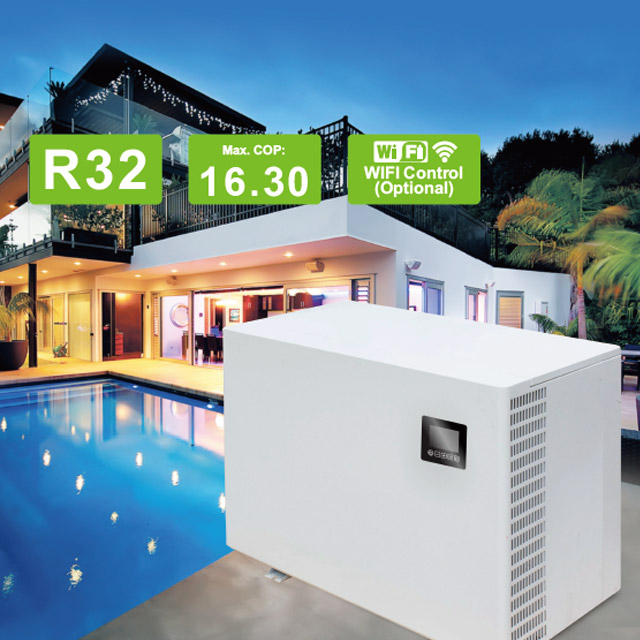 When operational, air source pool heat pumps use four major components: the compressors, refrigerant, evaporator, and pressurizing valve.  The fan and the compressor, however, produce the most noises. The noise from the fan will depend on the model and velocity, air circulation, and flow of pressure.

Again, airflow is dependent on the heat exchanger, and as it passes through, it generates aerodynamic noises. The intensity of the noise fluctuates depending on the structure of the exchanger and the speed of the air. Noise is also affected by pressure flow, as a rise in pressure reduces noises.

On the other hand, sounds can also result from changes in heat in the ambient air surrounding the refrigerator and the air circulated through the refrigeration loop. As a result, the liquid in the air condenses and freezes in the exchanger. For the heat pump to work properly, its compressors have to operate backward for a short period to remove any deposited frost. Again, this could also cause a distracting noise, which may mix with the fan's noise.

Air source swimming pool heat pump usually makes moderate humming or whirring sounds while it’s operational.   Every unit operates at a distinct volume. The air source pool heat pump’s circuits and solenoid valves will produce slight noise when electricity passes through. The noise is not bothersome at all, but you should act accordingly when it starts to get different.

It’s somewhat hard to keep track of when your heat pump goes on or off.  And that's attributable to the location where it’s installed. A skilled contractor should install the heat pump in a position where it wouldn't make significant noises when it turns on and off. Each time a   compressor unit switches on and off, they produce louder noises that last for a couple of minutes.

Currently, most brands use inverter technology to reduce the speed of a fan and the compressor. Its major drawback is that it affects the performance of the heat pump. If you want the performance unchanged, you can remedy the noisy nature with a noise reduction kit. It comes along with

●       Fan Modification - Prop fans produce a lot of noise when they hack into the air. You may want to have it replaced with a high-efficiency centrifugal fan should the noises become unbearable. Instead of hacking the air, a centrifugal fan hum lowers noise levels without sacrificing functionality.

●       Sound Absorption Box - This is a metal box surrounded by sound insulation foam, meant to break up and scatter the airflow substantially.

Using the above materials can reduce the noise output by almost 17Dba. And you can still observe the below to reduce heat pump noises completely.

●       Do not install the heat pump in sensitive locations.

Note that the dB range decreases as you go out of a sensitive region. Because air conveys sound, and the fan is the noisiest component of a heat pump, the noise is diverted by angling the fan away from the sensitive location. While trees and shrubs break noises in their branches and spread them, walls also reverberate the noise and amplify the loudness.

But, if you are pressed against the wall, you can use Sound screens or barriers to block up the airflow and lower the noise level. They are similar to designs you spot on sidewalls along highways that act as sound barriers to separate traffic noises.

When answering the question "Are Pool Heat Pumps Noisy?" We must consider the size, the location of the installation, whether a sound barrier has been installed, and the use of sound dampening material.

Nevertheless, at approximately 10 meters or more, their noise volumes are generally lower than those of air conditioning units. Also, with attention and planning, you get to avoid making the neighborhood noise. You have to watch out when the noises become disruptive and brace it up with noise-dampening materials. Above all, install your heat pump in less sensitive places, and you are good to go.